The rupee, there is a long history and thousands of years’ story. In India, the history starts from the 6th century BC. Ephesus, the greatest temple of Artemis has provides some valid proof for the earliest coins known from the ancient world. They provided some temple coins for the purpose of worship their gods. This is the valid evidence of the ancient coins.
Form the middle east, ancient Indians were the first issuers of coins of the world along with the Chinese and Lydians. The first ancient Indian coins were minted the Republic kingdom by the Mahajanapathas in the sixth century BC, and these punch-marked coins are called Puranas, Karshapanas. 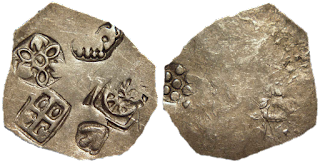 These coins are different markings and irregular shapes and made with the silver of a standard weight.
Then the came of Mauryas, they punch-marked their coins with a royal standard. The treatise Arthashastra mentioned the minting of coins, such as gold coins ( suvarnarupa ), silver coins ( rupayarupa ), copper coins ( tamararupa ), and lead coins ( sisarupa ).
Then the came of Indo-Greek Kushan kings, they established the greek custom of carvings on coins. The coins of the Kushan empire influenced a large number of tribes, provinces, and empires. So they start issuing their own coins.

One side of the Kushan coins had the diademed, helmeted bust of the king on and the favorite god in another side.

The Gupta Empire kings created a huge number of gold coins showing the performing various custom. The Gupta coins have shown, with their many diversity, and inscriptions in Sanskrit. And these coins are one of the finest coins in Indian history.

The 12th century AD is the main deviation of the Indian monetary system. Because the Turkish sultans of Delhi, they provided new face in coins. And they had replaced the royal designs of Indian kings with Islamic calligraphy. The Delhi sultanate provided a standardize the monetary system and issued coins of different values.

In 1526 AD the Mughal Empire, the monetary system was modified and consolidated. After defeating the Humayun, Sher Sha Suri issued new silver coins. And which is called rupaiya.  And this silver coins used during the remaining  Mughal period.

Sher sha silver rupaiya became the popular standard currency in the country. In the 1600s, the beginning of the British East India company many attempts to introduce the shearling pound in India. But all attempts failed and rupaiya grew in popularity. And at last, the British company exported these coins and use this coins in other British colonies.

The word Rupee is derived from a Sanskrit word Rupaya, which means wrought silver, and maybe also something stamped with an image or a coin. Money–in some way, shape, or form–has been part of human history for at least the last 3,000 years. Before that time, historians generally agree that a system of bartering was likely used. Bartering is a direct trade of goods and services.

Slowly, a type of currency involving easily traded items like animal skins, salt, and weapons–developed over the centuries. These traded goods served as the medium of exchange. This system of trading spread across the world, and it still survives today in some parts of the globe. 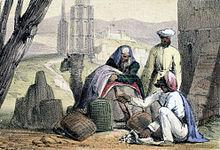 Cowry shells being used as money by an Arab trader

One of the greatest achievements of the introduction of money was increasing the speed at which business, whether mammoth-slaying or monument-building, could be done.

Arthashastra, written by Chanakya, who was a scholar at Takshashila and the teacher and guardian of Maurya emperor Chandragupta Maurya ( 340–290 BCE), mentions silver coins as rupaya other types of coins including gold coins copper coins, and lead coins are also mentioned.

COINAGE SINCE THE BRITISH PERIOD

The British settlements in Western India, South India, and the Eastern Province of Bengal independently developed different coinages in consonance with the local acceptability of the coins for the purposes of trade.

The coins of Bengal were developed in the Mughal style and those of Madras mostly in a South Indian style. The English coins of Western India developed along with Mughal as well as English patterns. It was only in 1717 AD that the British obtained permission from the Emperor Farrukh Siyar to coin Mughal money at the Bombay mint. The British gold coins were termed Carolina, the silver coins Anglina, the copper coins Cupperoon, and tin coins Tinny. By early 1830, the British had become the dominant power in India. The Coinage Act of 1835 provided for uniform coinage throughout India. The new coins had the effigy of William IV on the obverse and the value on the reverse in English and Persian. The coins issued after 1840 bore the portrait of Queen Victoria. The first coinage under the crown was issued in 1862 and in 1877 Queen Victoria assumed the title the Empress of India. The gold-silver ratio expanded from 1870–1910. Unlike India, her colonial master Britain was on the gold standard. To meet the Home Charges (i.e., expenditure in England) the colonial government had to remit a larger number of rupees and this necessitated increased taxation and unrest.

Acute shortage of silver during the First World War led to the introduction of paper currency of One Rupee and Two and a half Rupees. The silver coins of smaller denominations were issued in cupronickel. The compulsion of the Second World War led to experiments in coinage where the standard rupee was replaced by the "Quaternary Silver Alloy". The Quaternary Silver coins were issued from 1940. In 1947 these were replaced by pure Nickel coins.

Immediately after independence, the British coinage was continued. The Monetary System remained unchanged at One Rupee consisting of 64 pice, or 192 pies.

The Anna Series was introduced on 15 August 1950. This was the first coinage of the Republic of India. The King's Portrait was replaced by the Ashoka's Lion Capital. A corn sheaf replaced the Tiger on the one Rupee coin. The monetary system was retained with one Rupee consisting of 16 Annas. The 1955 Indian Coinage (Amendment) Act, which came into force with effect from 1 April 1957, introduced a Decimal series. The rupee was now divided into 100 'Paisa' instead of 16 Annas or 64 Pice. The Naya Paise coins were minted in the denominations of 1, 2, 5, 10, 20, and 50 Naya Paise. Both the Anna series and the Naya Paise coins were valid for some time. From 1968 onward, the new coins were called just Paise instead of Naya Paise because they were no more naya = new.

With high inflation in the sixties, small denomination coins which were made of bronze, nickel-brass, cupronickel, and aluminum bronze were gradually minted in Aluminium. This change commenced with the introduction of the new hexagonal 3 paise coin. A twenty paise coin was introduced in 1968 but did not gain much popularity.

Over a period, cost-benefit considerations led to the gradual discontinuance of 1, 2, and 3 paise coins in the 1970s. Stainless steel coinage of 10, 25, and 50 paise, was introduced in 1988 and of one rupee in 1992. The very considerable costs of managing note issues of Rs 1, Rs 2, and Rs 5 led to the gradual coinisation of these denominations in the 1990s.

FIRST INDIAN COINS   The rupee, there is a long history and thousands of years’ story. In India, the history starts from the 6th...